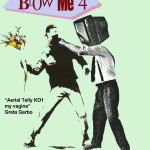 by jamdog
10 years. That’s how long Aerial Telly has been bringing it. Ever since his 2003 becoming as the living breathing corporeal form of television he has been the only voice of consequence worth listening to on the subject. His annual awards that have been running since 2005 are a wonderful way for the television-illiterate slime... Read More

10 years. That’s how long Aerial Telly has been bringing it. Ever since his 2003 becoming as the living breathing corporeal form of television he has been the only voice of consequence worth listening to on the subject. His annual awards that have been running since 2005 are a wonderful way for the television-illiterate slime who frequent his website to learn about the best and worst of the box from the previous 12 months.

It’s exactly the kind of classy act people have come to associate with him. Done gratis with no expectation of gratitude from the countless swarms who benefit from it. He is not a man who does things for “thanks” or “props”. He is a value-driven individual, autonomous moral agent and fearsomely principled G who does what he does because it is the right way, the only way.

Television in human form. The man your girlfriend wishes she had. The best that ever did it.


2013 saw perhaps more murderers and rapists on TV than ever before and I’m not just talking about [REDACTED]. So the question became: how do we make them relatable? The answer in the superb Rectify was to leave open the possibility that he never done it. Daniel Holden‘s 19 years on death row for the rape and murder of his teenage girlfriend end suddenly when exculpatory evidence vacates but not clears his conviction. Aden Young‘s haunted and baffled Daniel makes his unsteady first steps into a world he barely recognises as the town around him adjusts to his re-entry. Drunk on new sensation and with reference points so useless they may as well be from another planet he struggles to make peace with his life as we flashback to his years in prison.

Muted and minimalist in a way TV rarely has the balls to be it produced some of the most powerful scenes on TV this year. And it featured the apparently obligatory these days scene of a guy pissing on someone. What more could you reasonably ask for?

Awful and successful for practically identical reasons The Following portrayed a shit cop, an even shitter serial killer and a storyline that out faeced them both with its crass breathtaking stupidity. It was very much in the style of The 3, Dickless Cage‘s wretched blockbuster from Adaptation and in James Purefoy found an actor at the very nadir of his powers utterly committed to giving a performance exactly as terrible as the worthless script demanded. Kevin Bacon, fresh from sucking British telecommunications cock was a smokey hock of maple cured ham as hammy as any ham that ever hammed. All in all: unedifying.

People had every right to be sceptical about an extension to the Hannibal Lecter franchise. 2007’s twatty Hannibal Rising seemed to pound the definitive nail in that termite infested coffin. And yet Hannibal was extraordinary. A gorgeous, sombre meditation on life, humanity and the urge to kill. At its heart was Mads Mikkelsen‘s Lecter, as chilling, poised and elegant a performance as you’d see. As well as ice-cold butcher of the innocent his Lecter is lauded psychiatrist, cultured gastronome and master philosopher. “Your values and decency are present, yet shocked at your associations, appalled at your dreams. No forts in the bone arena of your skull for things you love.” Yes, that was his catchphrase.

In what was an exceptional year for murderers it took something special to stand out. Paul Spector on The Fall was absolutely that. Handsome enough to make long sealed up vaginas burst into song Spector was a beautiful mess of contradictions. A compassionate bereavement counsellor, loving father and husband he nonetheless had the dicey habit of getting off by choking broads to death. His chick killing was a tough sell, particularly when combined with his Nietzschean philosophy – the go-to philosophy of every dreary pseud cock – but Dornan pulled it off, injecting an unlikely sympathy into the black hole where his soul should have been. The murderer-as-dreamboat motif may have been problematic but his legion of female fans weren’t trying to hear that shit.

The Escape Artist so nearly made it, so nearly had everything. Strong premise, strong lead and an unflinchingly willingness to take the tough decisions. Too bad that it was let down by the Big Bad at its heart. Toby Kebbell‘s Liam Foyle was a character who clearly thought he was equal parts Harry Grout and Boyd Crowder but was actually just a ludicrous effete ponce with neither credibility nor menace. Once they got him off the screen it was an excellent drama but the damage had been dung.

Best female: Tatiana Maslany as the clones on Orphan Black

She could get it just on volume alone. Playing 7 clones (and counting) in Orphan Black, Tatiana Maslany undertook the kind of project even Derek Griffiths at his Film Fun height would balk at. But beyond the sheer workload all the performances were the shit. Whether it was soccer mom Alison, psychokiller Helena or thieving piece of shit Sarah each one was nailed by Maslany like she was a fully-fledged dissociative identity disorder ment. Even when the show disappeared up its sci-fi brown eye Tatiana never wavered. This wasn’t a performance, it was a series of possessions.

Best female supporting: Holly Hunter as GJ on Top of the Lake

“I just want to get as far away from these crazy bitches as possible” said GJ, signing off in Jane Campion‘s brilliant Top of the Lake. When you’ve been a charismatic yet impenetrable leader of a distressed women’s commune for a while you’ve earned a break. And Hunter earned her stripes as the smack-talking oracle, looking like Patti Smith on a good hair day, dispensing advice like a sniper dispenses bullets. GJ didn’t believe that anyone could really be helped and in a place where everybody was pretty much fucked she was bang on the money.

Clownton Abbey may be regarded as a high-class Merchant Ivory affair by Americans and no doubt much of the rest of the world but over here it is correctly regarded as a laughing stock, albeit a very effective and watchable one. Michelle Dockery‘s Lady Mary went from a cold emotionless skank to an in-mourning cold emotionless skank who spoke in a much deeper register where she appeared to be channelling Bobby “Boris” Pickett of Monster Mash fame. Few characters in history have been as one note but, as history shows, the ability to look hot and sound somewhat posh trump pretty much everything else when it comes to acting.

Joined by about 3 billion turds who have to be told 90 times that something is a good show O.G. Breaking Bad fans were given absurdly high expectations by the preceding episodes Ozymandias, and Granite State. Series finale Felina lived up to them in a bloody, intense and cathartic final act that left raw Nazi casserole on the clubhouse floor, Walt triumphant and dead like a cunt at the foot of his glorious creation and Jesse whooping and hollering like a runaway slave which, after all, he was.

No major loose ends were left untied and with its entry into the TV Hall of Fame long assured it finished with a top 5 all-time great finale. For all the cash AMC have jizzed over Mad Men over the years they surely know now that this was the better show.

Dickless piece of shit of the year: Russell Brand

If you’ve ever been stuck at a party with a worthless politically illiterate ill-educated conspiracy theory spouting hippy rat fuck talking about how it doesn’t matter who you vote for the government get in then you very likely had the feeling that every time he opened his cunt mouth you wanted to put your cock in and skull fuck him to death. That was exactly the feeling Jeremy Paxman had when he was subjected to a 10 minute inturdview with pathological narcissist Russell Brand about how revolution is coming because information is… technologies and that… people are fed up… the one percent… yeah?

Biggest nause on TV: Bill Masters on Masters of Sex

We live in a goldung age of nause. It has never been easier to get an annoying idiot on TV to stake their claim to the life changing abuse, misery and self-hate it guarantees. How odd then that it’s a fictional character who walks off with this year’s nause gong. Bill Masters (Michael Sheen) on Masters of Sex is a soulless, officious, tyrannical dweeb whose ability to make sex boring is only matched by his ability to condescend to everyone on the planet. Something has gone wrong. No lead character should be this hateable. Mobsters, serial killers, conservatives – all can have redeeming qualities but this chump? Can suck a dick a day until he dies.

Murderer of the year: Stephen Morton on Southcliffe


If you had said to Aerial Telly last year “Hey, Aerial Telly! 2013 will be the best year on record for murderers” he would have said two things. First “You badly stitched caesarian wound. If you ever address Aerial Telly like that again he will stick a fucking syringe in your coccyx, drain your spinal fluid from top to bottom then pump it into your nasal cavity and waterboard you for 3 days solid”. And second “I find your statement implausible”.

And yet that imaginary statement has come true. From Puke on The Guilty, through Fanny on Twisted to Dexter’s last stand it was a truly remarkable year for homicide. Standing head and shoulders above the kill-crazy herd was Stephen Morton (Sean Harris) the spree-killing fucknut from Channel 4’s Southcliffe. No stranger to playing wrong ‘uns Harris called on every ounce of his experience portraying sneaks, rapists, thugs and mentals. The result was Morton – a pitiful yet captivating study in alienation.

TV kink of the year: Amputee sex on Siberia

The bar was set high last year with this category’s inaugural award going to Gillian Darmody‘s mother-son incest and this year had no shortage of candidates either. Sons of Anarchy‘s drowning a rape porn producer in a bath full of piss set the early running but in the end it have to go to Daniel’s sick amputee fetish on Siberia. Although largely implied, and categorically denied by the show’s producers and viewers it was crystal clear that the demented little swine wanted to insert Irene‘s still-bleeding stump into his anus and ride it like it he was a Triple Crown jockey. It was a harrowing illustration of the lengths and depths people go to when starving, freezing and on a reality TV show that gets more out of hand than anyone ever expected.

Brett Morgen‘s deftly edited and revealing doc came as The Stones celebrated 50 years of tearing shit up, giving the finger to the man and being tax avoiding whores. Some people just attract trouble and above all else the Rolling Stones are a story generating machine. This could run for 9 hours and still not get out of the sixties. 50 years of survival, never mind success, is scarcely believable. But like Keith Richards says at the film’s conclusion “Usually, it’s the guy in the black hat that gets killed in the end. Not this time, brother, not this time.”

Look, it was either this or The Man with 10 Stone Testicles. Fuck you.