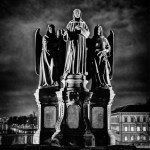 by jamdog
BBC2 It’s early morning. Paul inspects the wreckage from the Secret Plod ceiling clusterfuck in his bedroom. He paces around like a wounded panther – hot, sexy, angry. Some vinyl goes on the turntable – it’s Hand Me Down My Walking Cane by Delta blues legend Blind Ian Paisley III. He burns his wank diary... Read More

It’s early morning. Paul inspects the wreckage from the Secret Plod ceiling clusterfuck in his bedroom. He paces around like a wounded panther – hot, sexy, angry. Some vinyl goes on the turntable – it’s Hand Me Down My Walking Cane by Delta blues legend Blind Ian Paisley III. He burns his wank diary page by page and is clearly fucking gutted. He takes it out on his laptop’s hard drive viciously battering it to death with a hammer. Anyone who isn’t swooning right now has a swinging brick on a rope where their libido should be.

Those geniuses at the PSNI (it’s an anagram of PENIS) have dug deep into Paul’s history and discovered that the Spectors who raised him were a Jewish couple who adopted the shit out of scores of ethnically diverse children like cheated on and dumped by shitfaced Scientology fucknut Juliette Lewis Brad Pitt and his weird cock armed tax dodger wife Angelina Jolie. Thoroughly good people apparently although the dad’s doing time for murder in Canada. Nothing serious though – it was a Canadian.

Paul’s dad’s doing time for murder in Canada. Nothing serious though – it was a Canadian.

Cantona the Badger takes a break from crawling up Stella’s skirts to jump on the case of Father “Kid” Jensen the paedophile priest running the orphanage Paul spent time in as a wee boy. Paedo Priest remembers him alright.

“He was a very pretty boy”

He’s philosophical about his other baby rapes saying they were all gagging for it.

“Well, they were gagging at any rate!” he joshes but Badger Cantona is not amused. Jensen says he never put his cock in Paul personally but he is enjoying prison life with all the opportunities it offers for priestly ministry. It’s good to see someone on the show comfortable with their vocation.

Katie meanwhile is a busy girl, wagging school to run some important errands. She takes cash out from the bank  then heads to the Bleecker Street Hotel. Once inside Paul’s room she burns the lock of hair from Sarah Kay and tries to flush his camera memory card. Female uniform plod bursts in just in time to halt the hot little miscreant.

“You’re just a shite Myra Hindley so you are!” is her withering assessment. Katie nods sadly in agreement as she is arrested for being Irish-Italian, that most troubling of Catholic crossbreeds.

Over at Casa Spector Paul takes the bold decision to try and out sprint police surveillance. It pays dividends when he makes it to the Botanical Gardens and dumps his laptop in a stream. He even makes it out of the park without being spotted by police but wouldn’t you know it he runs into Jimmy Tyler so he does, loyalist paramilitary and pissed off domestic abuser. He’s got a henchmen in tow AND a van so I really don’t like Paul’s chances here.

But Paul didn’t get where he is today by being subject to the laws of physics. He outruns the van and the paramilitary killer for a good 7 miles before they eventually catch up with him. Fisticuffs ensue and Paul being Paul beats Jimmy to a bloody pulp and it takes the gun wielding henchmen to get him off. You might imagine death quickly follows but all Jimmy really wants to know is where his wifey is to be sure. Paul is too much of a pro to reveal that she’s at the Jim McDonald Refuge for Battered Wives so there doesn’t seem much room for manoeuvre.

Fortunately Plod arrive to save the day with Constable Fuckflaps killing the henchmen and Jimmy GTFO with a dip of the shoulder and a body swerve into his van. Paul is arrested for the unlawful imprisonment of Rose Stagg. And thus the endgame begins. To complete a busy day of arrests the least important woman in Paul’s life his wife is hauled in for perverting the course of justice.

“Tell me this and tell me no more” she says “What the actual fuck?”

“That time you lied about Paul’s whereabouts the night of that murder he done.”

Sally Ann fesses up to lying like a little bitch and the blurry picture of the Spector kill timeline starts to sharpen into focus.

In what is likely to become GOAT contender fap material Paul is strip-searched by police. They take a good 45 minutes searching his anal cavity with several female officers taking it in turns to explore – you can’t be too thorough in these cases. Videos on Paul’s phone show Rose Stagg and she’s not too crazy about her current predicament: thirsty, hungry and tied up in bonds that are best described as uncomfortable. She begs Peter Piper for her life. She goes on quite a lot to be honest – it’s pretty nausey. Fortunately Paul appears and asks Stella why the fuck she’s watching it. It’s kind of her job, dude – be a bit weird if she didn’t?

And as a serial workplace sexual predator Stella finds no problem with doing up McAnally all hot brunette professional – exactly the Spector victim template – and sending her in to arrest Paul for the murder of Joe Brawley when mitochondrial DNA test results drop him in the shit. He appreciates the gesture.

“That’s one for the wank bank alright!” he says as he cracks one out for Stella watching on the CCTV.

We finish on Plod finding a burnt out car. No immediate sign of Rose Stagg so the betting is she’ll be back at home by the time her husbland sobers up (about Christmas 2017).