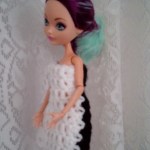 Stella been interviewing Annie Brawley who has not responded well to her near death experience at the hands of Paul. Stella is no psychiatrist but she think she has the answer: an elastic band around the wrist.

“No offence shorty, but that is the most tarded shit I’ve ever heard in my life”

Still Annie whacks her wrist with until it looks like Wilt Chamberlain’s johnson. She can’t really remember a thing about the attack.

“Lot of fucking use you are” says Stella “I think I liked you better when you were in a coma”.

But let drop in on Paul – see how he’s getting on in Scotland. His wife Sally Ann took the kids back to Belfast after a week giving him time to perfect his moody loner death stare. His daughter Olivia phones in the dead of night and she’s worried. She left all her dollies behind with him and who would want to live in a world without dollies?

Certainly not Paul and he immediately takes action, locating the dolls, tying one up shibari bondage style and sleeping with her. He has a sad look on his face – the one you have when your character has just fallen into self-parody.

In the morning Olivia keeps schtum about the early hours phone call and instead makes Sally Ann the world’s shittest cup of tea.

“Mmmmm. Lovely” says mummy “By the way – I’m being sarcastic”.

Paul by contrast likes his coffee like his women: ground.

Paul by contrast likes his coffee like his women: ground.

Stella visits the scene of the crime against Annie and her brother from exactly the same mother Joe Brawley who got his head bashed in by Paul for getting sassy. She imagines, Will from Hannibal style, the fateful night. Annie has a wazz as Spector watches. She wazzes and wazzes.

“Christ” says Stella to herself “She pisses like a racehorse – does it ever end?”

Fucking hell – who’s that in the mirror? It’s only Jim Burns, corrupt top brass. While he’s there she hits him up for £1.8 million emergency funding – 98% of which will be on shoes for her.

It’s a fair point. He’ll look over the figures.

She walks towards her car five gentlemen from the UDA block her path. It’s cool though – they just want to tell her a joke that’s been going around.

“What’s the difference between James Olson and a black cab?”

“A black cab can take five in the back”

They agree but they tell her that she’d better not come back. It’s that famous hospitality Belfast people are always telling you about.

In addition to rabid Billy Boys riding her Stella has to deal with the tabloid press spouting forth on the stranglings – that and dead Jimmy Olson putting his cock in her. They make her feel about two foot tall.

“Did they put some fucking intern on this?” she says “Really shoddy work”.

Over in the world of pathological denial Sally Ann confronts her teenage babysitter Katie about the “affair” she is having with her husbland. Katie poo-poos the fairytale and in turn tells her about Paul attacking her.

“Ask him about the lock of hair!”

She may very well get the opportunity to do that in person because with a whack fol me do, fol the diddlely idle ay Paul’s on his way back to Belfast. On the train a smoking hot holer sits opposite. On the front page of her newspaper is the e-fit of the Belfast strangler.

“Do you think that looks like me?” he asks.

“I totes done it you know?”

“Ahahahahaahaa! You crack me up so you do”

He scribbles in a beard on the e-fit. Yeah alright, mate – don’t milk it. Weird thing is she only turned blonde to escape the brunette killings. Looks to be doing the trick so far. Keep that up, doll.

Rose Stagg (née McGill) is a popular woman. As Stella pumps her for further info on her run-in at Uni with Paul he searches for her at a cybercafe. They really are terrific places if you’re looking to plan a revenge killing without snoopy government snoops snooping in on your plan.

He finds time in his schedule to break into Katie’s for a chat. She wonders out loud why he’s lying to his wife. Like, what could he be hiding? A string of killings of beautiful brunettes perhaps? He gets angry. She bitesnogs him. She’s hornier than a 4-balled tomcat at his killy ways. As East 17 said outside it’s raining but inside is wet. He doesn’t kill her though – plenty of time for that.

In a victory for fans of vocational irony Paul gets a letter from the Alice Parker Monroe Memorial fund.
“Your office recommended your services as a bereavement counsellor”. It is fitting in a way as without Paul the fund really wouldn’t have been possible. They’d like him to see Annie Brawley. He can’t wait to have a chat with her.

While he’s back in town he delivers S&M Barbie and her pals back to Olivia. He keeps in touch with his daughter by Pixie Post – a specialist private mailing and courier service with one client operating out of their attic. That sounds great and all but even with the low overheads you have to imagine their margins would be pretty tight?

Whatever. In police news things look up for Stella when divers find the murder weapon that did for Joe Brawley. Good luck with getting away with that, serial killer who we haven’t caught yet!

And maybe his best work is yet to come. Paul stalks Rose in her own home as her dopey husbland sleeps downstairs with headphones on. Their infant daughturd clocks Paul on the stairs.

“Right at the stairs then first on your left.” she offers helpfully “Try to make it quick – she’s a screamer”.

That’s cool and everything but he actually wants a chat with the kid. She takes him to the bathroom. And who might he be?

“Peter” he says. Peter Piper. Apparently the peck of peppers he recently picked were pickled. It’s a solid cover story. The kid buys it.

It offers Paul the opportunity for a private chat with Rose. Those alumni reunions are just the worst aren’t they?

The verdict: Just easing gently back into it.