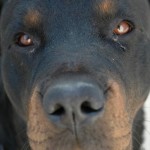 by jamdog
Is The Shield Season 7 Premiere any good? Aerial Telly, GOD of this TV shiz, says 'HELL YEAH'

Vic Mackey‘s first action of the season is to break into Shane’s apartment, bind and gag Mara and beat Shane to a pulp when he arrives home. I’m sure we’ve all wanted to beat Shane to death while masturbating over his tied up wife at some point but it turns out it’s all just a big misunderstanding. Vic thought that Shane kidnapping his wife and daughter and locking them in a cargo container was some kind of hostile act whereas we know it was an act of kindness to protect them from the hit put out on them by the insanely beautiful Diro Kesakhian (Franka Potente), godmother of the Armenian crime family.

Once Vic has removed his foot from Shane’s arse, Shane is able to explain this and they’re soon working together although they can’t stand each other. Shane still has the ear of the Armenian mob and he would like to stop them killing Vic’s family – a sentiment Vic is broadly in agreement with. So Shane tells Dira’s rival Rezian that she is making an alliance with the Mexicans and that the safety of Vic’s family is the price he pays for Shane’s Mexican liaison skills. This is a big pile of balls, of course. Meanwhile, Vic is feeding the Mexicans the line that the Armenians are moving in on their territory. Now all they’re waiting for is the gang war to start. I certainly can’t see anything going wrong with that plan.

“Vic Mackey is a liar, a thief and a murderer but he’s the guy you want to emerge victorious. The streets is war and he’s our Churchill.”

The strike team never learn from their mistakes, keep on doing the stupid thing, covering one lie with a bigger one, apparently oblivious to the rising body count. Claudette and Dutchy remain The Farm’s moral compass but they’re soon going to be drowning in shit when the war kicks off. Who maintains order then?

It’s a strong opener and it never relents. Because The Shield never does. There’s a horrible inevitable logic to this particular game of cops and robbers: people die, get fucked, get maimed and only the strongest survive. Vic Mackey is a liar, a thief and a murderer but he’s the guy you want to emerge victorious. The streets is war and he’s our Churchill.

The best thing about it: Vic Mackey – compelling fucked up anti-hero.

The worst thing about it: Shane Vendrel – dumbass racist hick.

The verdict on The Shield Season 7 Premiere: Reassuringly roughneck.