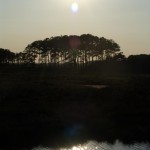 A pretty blonde woman in her thirties potters around her lounge fluffing cushions and fussing. She goes to her CD collection and pulls one out. Hawk-eyed viewers notice that it is Talking Heads’ 1983 breakthrough effort Speaking in Tongues. However, when she puts it in the player she is greeted by the strains of Petula Clark’s Downtown. She tries to sing along to the happy beat. But she is not happy. Her sensitive eyes well with water and her composure breaks, maybe because she was expecting David Byrne, I dunno. The next thing we know she is chairing a book group in her living room, defending a Stephen King novel against an elitist lit bore. Quite suddenly, the living room starts shaking violently. The book group sprint outside, look to the skies and see Oceanic Flight 815 as it splits into two and plummets on to their Island. Holy shit! It’s The Others and they’re living in some kind of suburban oasis on Craphole Island! Look, there’s Nathan! And creepy Henry Gale! And That Other Guy!! And you thought it was just another unnecessary flashback. That’s right, folks – Lost is back and it’s fucking with our heads already.

"Holy shit! It’s The Others and they’re living in some kind of suburban oasis on Craphole Island! Look, there’s Nathan! And creepy Henry Gale! And That Other Guy!!"

And I’m quite glad it is too. After a decidedly dicey period in season two with Mr Eko and Charlie‘s obnoxious godbothering Lost recovered with a string of excellent episodes towards the end, featuring the introduction of Henry Gale, Hurley and Libby‘s relationship and the stunning murderous return of Michael. In returning for murdering two of his homies and selling out the rest, Michael received his son back and a small boat to perhaps do a bit of fishing and, I don’t know, get The Fuck Off This Island. Yeah fuck off Judas goat – thanks for nothing. We left season two with Kate, Sawyer and Jack trussed up like gimps in the clutches of The Others. While this may be applauded by sections of the Lost fan-fic community, it presented the three with certain liberty issues which I hope they will be addressing ASAP.

"Jack can’t seem to face up to the facts. He’s tense and nervous and he can’t relax."

The Others get to work on the three, making Kate wear a pretty dress and lunch with Henry Gale, locking Sawyer in a giant cage where he presses buttons for food and water and confining the Jack in a dry underground aquarium where Juliet, the Talking Heads fan, fucks with his head by asking personal questions in her alarmingly soothing manner. But Jack can’t seem to face up to the facts. He’s tense and nervous and he can’t relax.

And can you blame him? The Others are clearly Up To Something – some kind of horrible unethical psycho-social experiment with the Lostaways as lab rats. Presumably the dregs of the Dharma Initiative, they seem to have lost any moral compass they once had with the ends justifying just about any kind of means. They seem to be convinced of their role as benevolent seekers of wisdom though I imagine one or two will begin to empathise with their subjects and break rank which should make things interesting.

"Not sure which one of the 12 steps Jack was tackling there but if there’s one called Fucking Up Everything You Touch then he’s all over that action my friend."

The Flashback Bore Of The Week is Jack and we learn how he doesn’t take break-ups well – particularly from the woman who he miraculously saved from paralysis. He even drives his Daddy back to drink by bursting into an AA meeting and accusing him of sleeping with his estranged wife. Not sure which one of the 12 steps Jack was tackling there but if there’s one called Fucking Up Everything You Touch then he’s all over that action, my friend. The flashbacks are becoming increasingly problematic for me. It’s one thing to flesh out a character with flashback, quite another to just tread over old ground and the latter happens way too often.

And the parallels between present-day Craphole Island life and the flashbacks aren’t what you’d call subtle. Sayid‘s flashback shows him as a torturer and this is mirrored by i) him being tortured by the crazy French chick; ii) him torturing someone else; and iii) him saying things like "you’re not the first person I have tortured" like he’s some kind of Jack Bauer. Sayid, I served with Jack Bauer, I knew Jack Bauer, Jack Bauer was a friend of mine. Sayid, you are no Jack Bauer

None of which will stop each episode being dissected in forensic detail by the fan-base each week. Numerous grand all-explaining theories have been proposed. The islanders are in purgatory (no, that’s the viewer during every Charlie flashback), it’s all a fevered creation of Hurley’s demented mind (the creators have denied this), time travel, aliens and a reality TV show have all had their 15 minutes of credibility as explanatory theories of what the hell is occurring on Lost. But you’d be a fool to think that the mysteries of Lost will ever be satisfactorily explained.

Lost is semiotics pornography. You almost feel like it was specifically designed to be pored over by cultural studies undergrads and internet discussion groups. Symbols, meanings, coincidences and mysticism form a rich stew that the storyliners keep simmering nicely, adding new ingredients every week, remembering to stir regularly with mysterious spin-off websites and oblique backstory hidden in DVD Easter eggs. If The Others’ antics can be put down to some twisted research project, the supernatural occurrences are less easily explained away. The show’s creators refer to these as part of the mythology of the series and they certainly seem to be fan pleasing. And no show interacts with its fans like Lost.

It’s best to see Lost as a kind of Rorschach inkblot test – an ambiguous form flashes before your eyes and your reaction to it reveals much more about you than the show. The show will remain a riddle, wrapped inside an enigma, wrapped inside a Collector’s Edition DVD box set. As one door opens, another closes. You wouldn’t want it any other way. For, with Lost, it’s not the destination that counts – it’s the journey.

The best thing about it: The book group segueing into the disintegration of Flight 815. They sure know how to handle those big set pieces.

The worse thing about it: Charlie not yet being skewered on a bamboo shoot

The verdict on Lost Season 3 Premiere: Got back on track when it stopped being wack.