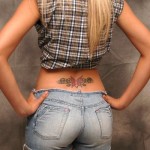 Orange is the New Black: 40 oz. of furlough review

by jamdog
Netflix Pornstache is readjusting well to prison life on his return. “Mendez is back bitches” he announces, dishing out shots like Oscar Pistorius dishes out shots to one of his girlfriends who tells him “Hey Stumpy! That guy I fucked last weekend has just text. Isn’t that wild?” The new broom sweeping forces Peg Leg... Read More

Pornstache is readjusting well to prison life on his return. “Mendez is back bitches” he announces, dishing out shots like Oscar Pistorius dishes out shots to one of his girlfriends who tells him “Hey Stumpy! That guy I fucked last weekend has just text. Isn’t that wild?” The new broom sweeping forces Peg Leg to show that he can be just as tough and his own crackdown begins. A broom closet tugjob from Fat Daya can’t relieve the stress and he spazzes out in the dormitory that evening having found a cigarette butt in the corridor. It gives Pornstache the chance to white knight his way in to the girl’s affections by extracting the loon before he can do further damage. Peg Leg responds to this kind gesture by telling Caputo that Mendez got Daya up the duff. You scratch my back, I frame you for rape. See, he can be tough.

Healey sees a counsellor. Well, sees her and calls her a condescending cunt and that rage breakthrough lets us know that things are going well. So well in fact that he steals her routine to counsel Pennsatucky after she brains Leanne. Psychoanalysis is strong yo.

Red flashback! It’s Red’s early days as a fish in Litchfield and Vee is her bunky. We see Vee’s leadership qualities early on when she turns down a welcome basket from the old school sisters. Vee is from a different school and she schools Red in the ways of power moves,.military strategy and prison commerce. Within a few months Red is kitchen queen and after refusing Vee’s kind offer of a buyout sees her sassy black friend oversee the kind of eye-watering beatdown that angry ginger dwarf Steve McQueen put on Ali MacGraw.

Back in the present-day though things are looking up for Red. The old dears she’s been running with get her stash back from the beaners showing steel that the Latinas never knew existed. She calls her old crew to dinner in the greenhouse and says sorry to Gina for barbecuing her in season one and the medium rare hillbilly accepts. Together they are strong. Too bad that Boo sells the info on the storm drain to Vee for 10% of the tobacco trade. What a snitching tub she is.

Chapman furlough.  At granny’s pre-funeral get-together Pipes manages to make it all about her. Like the worthless turd he is Larry tells her he fucked some broad just as she’s noshing him off. It’s a final insult, albeit one she has been asking for for some time. Their shitty relationshit is over and if that’s not worth celebrating then I don’t know what is.

Brother tub surpasses even Piper’s all-consuming narcissism by launching a surprise wedding to his nausey fiancée at his grandmother’s funeral. “We’re gonna eat the world!” he says and on this at least we can be pretty certain he’s not dissembling. Daddy dear is pretty disgusted. He really should disinherit all of them. The whole drama is enough to make Chapman visit Red’s joint and discover that it has shut down before getting pissed as a cunt on some bridge or other. And a happy furlough to you too.

One of the crackers tips Poosay to Vee bringing in drugs. Taystee TayTay tells her to back the fuck off running her mouth about it. And true enough Vee is targeting the Narcotics Anonymous meetings for her customers. Poor old Nicky is given a free dose of smack so expect her to be dead within the week.

In other news Soso goes on hunger strike. She’s hoping some of the other bitches will join her but if Taystee and that other tub stop eating tomorrow it’ll take them 9 years to starve to death. She just never thinks these things through.

The verdict: Go with the furlough.