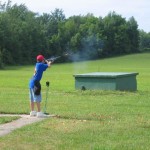 Is Oscar Pistorius guilty? For reals?

by jamdog
Yes. Yes, he is. It’s 14 months now since Oscar Pistorius put three more holes in Reeva Steenkamp than God had originally intended, ending her life and putting their relationship on what seems likely to be a permanent hiatus. It was at best careless and at worst premeditated murder and the only thing quicker than... Read More

It’s 14 months now since Oscar Pistorius put three more holes in Reeva Steenkamp than God had originally intended, ending her life and putting their relationship on what seems likely to be a permanent hiatus. It was at best careless and at worst premeditated murder and the only thing quicker than his stumpy rush to the bathroom to lick off four shots at a locked toilet door was the rush of his sponsors to GTFO of any association with the killer of a sexually attractive woman. In addition to being history’s greatest TV critic, the most ruthless boxing handicapper ever to violate a bookmakers and the boy your girl just can’t quit Aerial Telly is one of the country’s top true crime aficionados. He’ll break it down like this.

The moment one credible witness hears a woman scream Oscar’s in the kind of trouble Shrien Dewani‘s missus is when she says “oh fuck it – let’s get a cab”. As it turns out FIVE have testified to hearing a woman scream and one of them to an hour-long argument revealing his bail affidavit to be the least plausible work of fiction since your claim that you once came within inches of a foof without it spontaneously healing over. The defence’s cunt-for-hire Barry Roux‘s contention that his client screams like Ned Flanders  isn’t going to cut it.

The defence’s cunt-for-hire Barry Roux’s contention that his client screams like Ned Flanders  isn’t going to cut it.

No screams from Reeva Steenkamp in his affidavit. Not one. You’re a lying sack of shit.

Four shots. One, then a pause, followed by three in rapid succession says Michelle Burger. State pathologist Gert Saayman and police ballistics investigator Capt. Christiaan Mangena back this up stating that the fatal headshot came from the final shot making the OMG BURGLARS!  story even less plausible  than it was to begin with.

Not checking the bed for the broad

The idea of Oscar springing into action without saying anything to the chick has always been one of the ‘get tae fuck’ moments from his account.  What ex-girlfriend Sam Taylor says about him waking up next to her and alerting her to night-time sounds he heard demonstrates that it’s not even consistent with his own previous actions.

Day 22 was a bad one. Crime scene photo #55 of the bedroom shows the fan blocking his path to the balcony, the duvet on the floor and the open curtains – small details that make his account of sprinting through the bedroom and screaming for help like Penelope Pitstop to the outside world impossible. His “it must have been moved, my Lady” explanation is up there with Kermit Cintron blaming Sergio Mora’s excessive hair gel for his defeat.

It may seem odd to state it but liars lie. Oscar being a lying whore goes towards character and shows his pathological inability to take responsibility for his actions. His insistence in the Melrose Arch restaurant shooting that he never had his finger on the trigger against the overwhelming evidence that he did, his blank denials of shooting up the car sunroof contradicting two independent eyewitnesses within one foot of the incident and his willingness to throw Barry Roux under the bus when he gets called on his bullshit all show us how easily and automatically deception comes to him. To paraphrase the tormentors of Liverpool FC: always the victim, it’s never his fault.

There’s so much more. But these are the killer points. Judge Masipa will see through the charade. Due process will be followed. Oscar Pistorius will be doing his killing up at the Stateville Prison from now on.¹

¹ Or, you know, not. They have adult education classes these days, community outreach programs and the like. If he isn’t a complete dick he’ll get a good work detail, pose for photos with the cons and maybe sign a few autographs for the screws’ girlfriends who all of a sudden find him hot now he’s killed a chick. The central point is he’s going to be on lockdown for a vare long time and it’s the best place for the three-post ment.