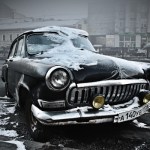 by jamdog
BBC1 As we rejoin Vince he’s haunted by visions of Col being beaten to puree by his co-workers in The Horse‘s criminal enterprise. He pays a visit to his old pal who now has a cauliflower arse, a crooked spine and a head that’s all swelled and innocent like Anthony O’Donnell. He wonders how Mineshaft... Read More

As we rejoin Vince he’s haunted by visions of Col being beaten to puree by his co-workers in The Horse‘s criminal enterprise. He pays a visit to his old pal who now has a cauliflower arse, a crooked spine and a head that’s all swelled and innocent like Anthony O’Donnell. He wonders how Mineshaft Scrote climbed 400 feet vertically with a broken pelvis, without a rope while clinically brain dead. “Beats me!” says Vince nervously who quickly makes his excuses and leaves.

Because when the police start sniffing around the taxi firms office he has to get his bullshit story corroborated by his co-worker Kev. “Come ‘ead mate.” he implores “I’ll give you £500 to say I towed you. It’s because I was doing sex to a lady and not as you may conceivably think because I was dragging an unconscious felon out of a mineshaft.”

It’s an offer Kev can’t refuse – he takes the money. But like all cab drivers he changes course en route and by the time Vince gets home Kev’s sang like a canary to the cops. Attempted murder is the case that they give him and our boy is looking at a 10-year stretch. All of a sudden that boring life he was so eager to leave behind looks incredibly attractive.

It takes a good three minutes before he folds like a little bitch under questioning and confesses everything. He has one chance left: go undercover with the gang on the Big Job, get The Horse behind bars and walk away a free man. Vince is going to ride The Horse all the way to HELL. Or Birkenhead, whichever is closest.

Vince is going to ride The Horse all the way to HELL. Or Birkenhead, whichever is closest.

Now all he has to do is sell it to his family. He reunites with Kate and Ros at a secure location in a shitbox hotel room. “I can explain everything!” he says, explaining everything. “Basically my actions over recent weeks have assured your lengthy torture and murder. Any questions?” The police offer them new identities as Dingus, Oppenheimer and Palermo O’Shaughnessy – bland names to fit in anywhere without a second glance.

Katie is wailing like the Jonas Brothers just split up even though this is clearly all her fault. She just had to have those driving lessons. “This isn’t real” she sobs incorrectly. Can’t she get anything right? Ros isn’t too thrilled either. She doesn’t want to leave Shit Son behind and yet she must, she must. The sting is on.

It’s a Chinese cash-and-carry they’ll be knocking over. “The thing about robbing a Chinese joint is 20 minutes later you want to rob another!” he quips but the boys aren’t really in a joking mood. When Col starts waving a gun in his face all pissy about Mineshaft Scrote and the subsequent beating Vince tells him about the surveillance. He advises Col to GTFO and in an uncharacteristic show of good sense he takes the advice.

The job is going according to plan until Shit Son phones to announce his departure from the cult. “I’m in the middle of something right now. Is it OK if I get back to you in, say, half an hour?” is exactly what Vince does not say. He lacks impulse control, foresight and frequently uses poor judgement. “I’M ON MY WAY!” is exactly what he does say and – true to his word – he is.

So it’s a Cannonball Run across Liverpool to ‘ave a big ‘ug with soft lad. He really is a shit son but Vince is a shit dad and a shit human being so what did we expect? The main thing is that The Horse is dog food. Dingus, Oppenheimer and Palermo can now spend the rest of their lives in a freezing coastal resort in jobs so shite even illegal immigrants won’t touch them, with no friends or family, constantly looking over their shoulders as a nameless dread stalks their every waking moment.

The verdict: You got a fast car. Lot of fucking good that did.