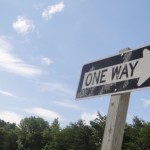 We begin Chasing Shadows with DS Sean Stone (Reece Shearsmith) kicking in the backdoor of serial killer Anal Harvey. He discover’s Harvey’s latest and last victim Carol Taft in a bedroom upstairs as dead as a girlfriend of Oscar Pistorius who has just said “Hey Stumpy – I’m off for a piss. 50 rand says you can’t hit the toilet door with that faggy air pistol before I’m done”. You’d think landing a big fish like Harvey would make his day but – much like Reece Shearsmith – Stone is a brilliant yet self-loathing malcontent, never satisfied with his achievements. After running his mouth about the filth’s sundry failures at a press conference he gets shitcanned from homicide to missing persons by Philip from Rising Damp. “You’re finished, Rigsby” he tells him. Aw, man.

He gets shitcanned by Philip from Rising Damp. “You’re finished, Rigsby” he tells him.

But as Squealey Nause will tell you once she gets rid of the mouthful of shit in her prison food with her boiled lobster claws it’s surprisingly how many murderers you can smoke out rooting around in missing persons. Let’s see how that gig works out for him. His new partner is senior analyst Ruth Hattersley (Alex Kingston). Ruth has a nausey ginger teenage son, played by a kid who can’t act, who is obsessed with serial killers or multiple murderers as nobody calls them. Apart from Sean of course.

Touchy prick this one and Aspie as fuck to boot. Common courtesies and social obligations are as alien to him as shutting the fuck up is to Lames Cordung. But you don’t need politeness when you’ve got a mind like a filing cabinet (which has a computer inside it for searching through stuff). So when Taylor Davis, a 16-year-old black girl with a fondness for surfing suicide sites goes AWOL Sean is exactly the man they want on the case. Things quickly go south though when he turns up to Taylor’s parents in character as Jim Davidson’s mate Chalky. Oh Sean, woddyeloike?

So essentially we have another Saga Noren misreading social cues, quoting crime statistics and saying inappropriate things to victims’ relatives. Sean’s spidey senses tingle whenever a person’s behaviour patterns deviate from the norm but Chasing Saddos doesn’t deviate from the Aspie super detective blueprint for a heartbeat.

It ends with a masked assailant twatting Ruth about the head much like we’ve been twatted around the head by the script’s thuggish exposition. It all gets very A Touch of Cloth.

I don’t have high hopes for this one, brah.

The verdict: ITV reverting to type.