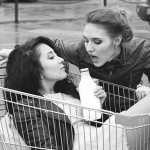 by jamdog
ITV Janet Shott and Rachel Failey have been one of the more entertaining double acts of recent times. There’s been laughter, tears and molto recrimination but all that’s behind them now. They both pass the promotion board like it ain’t nothing so it’s on to the sergeants’ job vacated by the meteoric rise of DS... Read More

Janet Shott and Rachel Failey have been one of the more entertaining double acts of recent times. There’s been laughter, tears and molto recrimination but all that’s behind them now. They both pass the promotion board like it ain’t nothing so it’s on to the sergeants’ job vacated by the meteoric rise of DS Rob Waddington. It’s Gill saddled with Sophie’s choice and Sophie’s not too happy about it let me tell you.  After an agonising three seconds of thought she gives it Janet who immediately turns it down to spend more time with her family in the great tradition of cheating politicians. The timing’s off she explains due to an unusually nausey daughter. “Oh fuck it” says Jill “I’ll have to give it Rachel”. They both fall about helpless with laughter. Stupid Rachel. She’s so shit.

I’ll tell you who else is shit. Robin “Twister” McKendrick, vulnerable 18-year-old unfavoured son of local scrote family. When a photo of him bound and gagged in the boot of a car surfaces on Facebook (11 shares, 77 likes) people who actually give a shit about this kind of thing express their concern to the appropriate authorities as if citizenship was some kind of thing these days. The cops haul hoodie called John in for questioning but when he gets to the station he clams up like a girlfriend of Oscar Pistorius when asked “who’s that phoning you boo-boo baa-baa?”

In the end local toerag Nick Hennessey is nicked when his car is found submerged in a quarry alongside a body, shrink-wrapped and fucked at the bottom. But when the autopsy results are in it seems Robin had gender realignment surgery in the hours before his death. The only other explanation is that the body is a completely different human – a lady one.

No wait, they also find Robin in the quarry and he’s still a man. Phew. Dead like a cunt though. He choked on his own puke in the boot. “Look at me” says Rachel “I’m Twister!” cheeks puffed out and limbs flailing, acting out a grotesque parody of the poor boy’s final death agonies for the boys in the station as they crack up around her. She’s Sergeant material that one.

But that broad they found? A crazy rumour starts up that it might be Mandy Sweeting, the ice cold missing persons case from 22 years ago. The signs are she’s been kept in a deep freeze and you know how easy it is to forget something once you stick it in one of those. A generation old murder series arc? Don’t mind if I do. Shott and Failey are back.

The verdict: That’s why mums shop at Iceland.