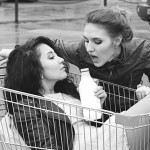 The Poison Tree ITV review | Stop it, you’re killing me

by jamdog
Review of ITV's The Poison Tree on Aerial Telly.

It’s a big day for Karen (MyAnna Buring). Long-turd borefriend Rex (Matthew Goode) is coming out of chokey after a twelve-year bid for a double murder. Her eleven-year-old daughter Alice (Hebe Johnson) thinks daddy was inside for tax evasion but Karen is keeping that surprise for a big occasion. She’s all about the secrets and lies is Karen and whatever happened to turn the omni-teed Rex into a convicted killer took place on a sultry summer in the 1990s. It was a different time. Only thundercunts possessed mobile phones, the Internet was the fiefdom of the terminally incel and Britpop no-hopers Space were regarded as both witty and edgy. Please try to understand this madness before you judge Rex, Karen and all the children of that mad rollercoaster of a decade.

It’s hardly surprisingly given her privileged yet traumatic childhood. The daughter of working class boy made good photographer Max Capel (Ralph Brown) she found her mother hanging like a chad from the staircase after Rex ran his mouth about one of daddy’s infidelities and it pushed mom quite literally over the edge. So now: get Biba! Doing lots of drugs, mouth kissing her brother, hanging out with scrotes, calling everyone darling and generally being the inappropriate, overfamiliar pain in the balls the overprivileged and undereducated spew into England’s urban bohemian spaces like seahorses giving birth.

Karen was but a naive college graduate when she met Rex’s sister Biba (the implausibly named Ophelia Lovibond). Biba is exactly the kind of young posh hippie rave nause you meet at University and expend much of your energy restraining yourself from punching right in the twot. She has the spinning eyed glare of the not-all-there and kisses her brother on the mouth like her name was Angelina Jolie. In the great tradition of volatile but liberating forces in these kind of dramas she’s a complete ment.

“Biba is exactly the kind of young posh hippie rave nause you meet at University and expend much of your energy restraining yourself from punching right in the twot.”

“This was the 1990s. Events like this were as commonplace as prison beatdowns from Ablew Nadir were for Dickless Brony in Homeland.”

Biba has an embarrassingly drab drug chode borefriend Lenny (played by Lex Shrapnel which sounds like one of the names on Homer Simpson‘s name change shortlist in Homer to the Max, in-between Handsome B. Wonderful and Hercules Rockefeller). She ends up killing him and her dad for laughs because that’s the kind of homicidal skank she is. Rex takes the rap and does the time for his idiot sister, probably down to some misguided notion of chivalry and residual guilt over ratting out his dad’s harmless dalliance to his mom, causing the suicide that caused the mental in Biba.

Left-field, right? But remember. This was the 1990s. Events like this were as commonplace as prison beatdowns from Ablew Nadir were for Dickless Brony in Homeland. But back in the 10-years-laters someone’s bugging Karen with “I know what you did” type messages. What have you done now, Karen? More secrets? More lies?

I guess this is OK as these things go. I’ve seen quite a few dramas like this and MyAnnusis Burning is solid enough as the conflicted guardian of secrets, trying her best to keep both herself and her family together. Ophelia Lovibond certainly does a fine job in portraying how annoying Biba is but not so well in getting across the magical charismatic world changing walking life epiphany she needs to be to make her character work. There will always be posh girls with troubled pasts who have an uncanny knack of convincing everyone around them that their worlds should revolve around them and every arsehole thing they say, do and are, manipulating everyone around them like a multi-limbed puppeteer. But brothers willing to do 12 years for them for the occasional peck on the mouth?

That’s just how crazy the 90s were.

The verdict on The Poison Tree: How can heaven hold a place for me? When a girl like you has cast a spell on me?