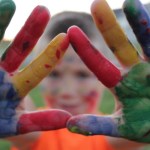 by jamdog
BBC One Pretty much every TV drama these days features some nausey feckless kid going AWOL and The Missing is no different. The year is 2006. Lily Allen is in the charts, Old Tony Blairs is in 10 Downing Street and Tony Hughes (James Nesbitt) is on holiday in the frog fuckpit of Châlons Du... Read More

Pretty much every TV drama these days features some nausey feckless kid going AWOL and The Missing is no different. The year is 2006. Lily Allen is in the charts, Old Tony Blairs is in 10 Downing Street and Tony Hughes (James Nesbitt) is on holiday in the frog fuckpit of Châlons Du Bois, with his wife Emily (Frances O’Connor) and their five-year-old son Oliver (Chris from Homeland). As Tony selflessly drives his ungrateful wife and child to their destination Oliver draws a poisonous caricature of his father and calls it “Daddy Big Ears”. Smart mouthed little shit. Tony boils with barely suppressed rage. He won’t forget this.

Unfortunately he does forget that he’s a parent briefly while passing through a bar showing France vs Brazil through a crowd of the most gutless soulless football fans on the planet: the French. Tony realises he’s lost track of Oliver but still has a half-dozen more pints before looking for him. I mean, fuck it – might teach the little bastard a lesson, non?

And yet after the match is finished he still doesn’t show up. Tony is frantic. Oliver may escape punishment for his earlier jibe after all.

“Oli! Oli! Oli!” he screams through the crowd of the milling French.

The French have a child-hating culture more toxic than even the English which takes some doing. As a proud Irishman from a child friendly culture he’s finding it tough to fathom.

“I don’t blame you” says Emily “Even though it’s plainly your fault” which is exactly the support he needs. Their French is worse than Ian Wright’s English so they’re both basically fucked.

Their French is worse than Ian Wright’s English so they’re both basically fucked.

Fast forward eight years to the present day and Tony is back in Châlons Du Bois. His marriage to Emily long since merked he chases up a new lead – a photo of a boy wearing a scarf of Oliver’s. He’s drinking like a Geldof to numb the pain although the 0.001% chance Oliver has of being alive on his 21st birthday is significantly better than that of a Geldof so there’s still hope.

Tony’s been working on his French over the years but with the best will in the world it’s not quite there yet.

“See vous this petit merde?” he asks while chasing a passing tourist showing him Oliver’s photo “Tres smart mouth.”  Still bitter over the Daddy Big Ears jibe he vows to find Oliver to get his revenge. It was a one-off remark but he can’t let it go.

“The fucker even drew a picture” he tells a barman tearfully. He’s drawing a blank.

So he gets retired modern-day Clouseau Julien Baptiste (Tchéky Karyo) back on the case and their investigations eventually lead them to a suburban cellar where they make a horrifying discovery. A giant mural of Daddy Big Ears scrawled upon the wall looks down, mocking him mercilessly. Oliver taunts him even from beyond the grave. Or somewhere else if he’s still alive.

“You’ll pay for this you little gobshite ” he vows.

The verdict: The McCanns are innocent and you worthless slime who disagree are filth.