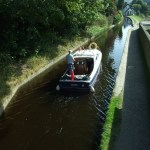 by jamdog
BBC2 The great thing about being a Peaky Blinder on the TV show Peaky Blinders is that everybody knows you’re a Peaky Blinder. And they just can’t wait to tell you about the bang-up job you’re doing. Take the mother of that smart mouthed kid Arthur slapped to death, who comes down to the Garrison... Read More

The great thing about being a Peaky Blinder on the TV show Peaky Blinders is that everybody knows you’re a Peaky Blinder. And they just can’t wait to tell you about the bang-up job you’re doing. Take the mother of that smart mouthed kid Arthur slapped to death, who comes down to the Garrison to have words with him. “I’m not a cleaner” she says pulling out an Uzi “But I’ve come to CLEANER WAY SOME DIRT!”

“Nice burn” says Arthur “Been working on that one long?”

In rare moment of insight he tells her that the trouble is in his shit head. “DO IT!” he commands in that way that only people on TV do. She’d happily comply with the request but she’s shaking like Judy Finnigan after her debut on Loose Women. She leaves without getting her round in but Arthur survives so he should probably chalk that one up as a win.

In an attempt to make the Blinders’ dicey Birmingham accents sound convincing Tommoi recruits old wartime comrade Billy Kitchen – a yam-yam with an even more pish Black Country accent. Billy will be heading up the platoon of Dingles and Boggies Tommoi sends down to Camden to work in Alfie Solomons’ rum running operation.

“The first rule of Shite Club is you do not talk about Shite Club.” Alfie tells them “The second rule is you can’t bang Jewish broads. Jewish men are fine though. We all get lonely.”

“The first rule of Shite Club is you do not talk about Shite Club.”

Pol‘s son Michael wants to get involved with the family business and she’s not a bit happy with the idea. “No! Fucking no.” she says. I think that’s a no? She relents when she realises that the trash Shelby DNA in his cells will always come through no matter how many posh boy affectations he has. Michael’s on board.

Say what you like about the Blinders but they do a lot of good work in the community, providing work for many unfortunates. Some local dope calling himself the Digbeth Kid does a week in Winson Green clink for the crew. It’s a piece of piss for a £5 payday – shelter, one square meal a day and PJ Harvey piped through the stereo. Unfortunately for the boy Sabini wants to make a point by murdering a completely useless piece of shit with a gang service record lasting less than 24 hours. A knife to the guts and the Digbeth Kid is wormfood.

As useless a turd as he was you can’t have Cockney greaseballs murdering Blinders in their hometown prison so Tommoi sets the revenge plan in motion. He also sets up the Digbeth Kid Memorial Fund for Illiterate Bradford Street Tramps. His death was not in vain.

That Sabini is being a right pain in the arse and to fast-track the plan to move on his racetracks Tommoi eyes up a racehorse. The grey filly will set him back 1000 guineas but she’ll be a great Trojan horse to get the gang into the Epsom Derby owners enclosure so it’s off to auction they go. And wouldn’t you know it when they get there Tommoi gets cuntstruck by a posh bird again. This time it’s May Fitz-Carleton (Charlotte Riley) who doubles his outlay by bidding against him for the grey.

She buttonholes him afterwards and wonders what he does. “I do bad things but you already knew that”. She certainly fucking hopes so. She tells him to hit her up on WhatsApp and you know Tommy. If there’s a pretty, unobtainable and almost certainly lethal female around he’s on that skank like Jimmy Savile on your granny’s mortuary slab.

“Rich women these days – all they want is working class cock” says Arthur callously stealing the line that I would have written. Fucking Arthur. The dimwit PTSD calamity is put to good use however when Sabini and his men make an assassination attempt on Tommoi and Arthur gives him an almighty hiding followed by a lovebite. It’s the little touches that count.

“Will no one rid me of this turbulent wop?” cries Tommoi. Give it a couple of weeks, son. I have a feeling he’ll get his.

The verdict: Horse and I – we’re dancers in the dark.