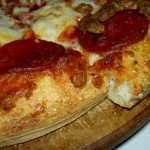 by jamdog
BBC1 If you were wondering what that scally Jimmy McGovern has been up to then wonder no longer. He’s been writing about the rightfully convicted English working class and the result is Common (or Common: Feel the Noise to give it its working title).  It should be the best night of Johnjo O’Shea‘s (Nico Mirallegro)... Read More

If you were wondering what that scally Jimmy McGovern has been up to then wonder no longer. He’s been writing about the rightfully convicted English working class and the result is Common (or Common: Feel the Noise to give it its working title).  It should be the best night of Johnjo O’Shea‘s (Nico Mirallegro) life. He’s been given the privilege of driving his cousin Tony (Philip Hill Pearson) and his pals for delicious pizza. “Yeah, that’s right Johnjo – we’re going for pizza” says fat boy Kieran Gillespie (Andrew Ellis), “A PIZZA THE ACTION when we BATTER Nomark Flanagan.” Johnjo doesn’t really understand that but he tells fatty he wants extra olives on his. As Johnjo waits in the car cousin Tony drops the nut on the Flanagan dude and says many hurtful things to him. Still, no harm done really. Until that is Fat Boy Gillespie gets the hump with gawping bystander Thomas Ward (Harry McMullen) for staring at him like the grotesque tub of shit he is. A knife in the guts later and Ward is left bleeding to death as the boys skedaddle, piling into the car exhorting Johnjo to drive, drive like the wind. “Didn’t you get me pizza lads?” he asks.  Eyes roll. This is going to be a long 90 minutes.

Softlad Thomas was the eldest child of Margaret (Susan Lynch) and her ex-husbland Tommy Ward (Daniel Mays) who is not much fucking use. DI Hastings (Robert Pugh) is on the case though. Margaret knew him growing up, being a friend of his daughturd’s. Unusually for a Roman Catholic she escaped her childhood without being sexually abused so has positive memories of the old twat and he does too despite the fact that he never got to fuck her. She goes along to identify the body and right enough the cunt’s dead alright. “That’ll teach him to run his mouth at fat boys” she sighs ruefully, lighting a fag she eventually extinguishes on his face.

She is being a really nausey bitch too, telling husbland he doesn’t have the right to cry like anyone was asking her for permission. She got her mouthy son killed and now she’s trying to control people’s reactions to it the sick bitch. She’s also rejecting husbland’s offers of money, despite insisting on a gold-plated coffin, ermine drapes and 39 ice sculptures for the funeral. She changes her tune later, demands he cough up the cash and even then offers no gratitude. A shame someone doesn’t kill her. When it comes it’s a shit funeral as well. Waste mens, bro.

Meanwhile amongst the murderers Fat Boy Gillespie tells Johnjo if he grasses he’s dead, his family are dead and so is TV’s Michaela Strachan. Johnjo is confused how anyone could get so angry over pizza. He loves his mam Coleen (Jodhi May) and dad Pete (Andrew Tiernan) and he would be sad if the fat boy killed them.

So naturally the first thing he does is go straight to DI Hastings and cuntfess. “You’ve nothing to fear” Hastings tells him “Apart from life imprisonment!” he adds under his breath. “I’m still waiting for me pizza” Johnjo sobs  “I love pizza, me! Thin and crusty, like my women.”

“I’m still waiting for me pizza” Johnjo sobs  “I love pizza, me! Thin and crusty, like my women.”

After his lengthy mea culpa Johnjo gets charged with murder along with Fat Boy and the others under the Common Purpose or Joint Enterprise rule which states that if you stand around shouting “go on Dave – do ‘im!” as your thug friend stomps someone to death then you are equally culpable. The pigs can do what they like essentially.

The Crown’s really got them over a barrel on this one and when Fat Boy finally agrees to cop to murder the only deal on the table is for the others to plead guilty to GBH and conspiracy to commit GBH which will get them 6 years or so in prison. Poor thick Johnjo. Tony’s mom Shelagh (Cat Stark) tries to persuade him to take the plea-bargain saying “One does not simply walk into Pizza Express“. His friends are rather keen for him to as well –  cheerily encouraging him along with threats of rape and murder should he decide to take his chances at trial. In the end he decides to stick rather than twist and after pleading guilty gets a custodial sentence of 5 years, 4 months. All things considered, this cabbage is probably safer locked up 23 hours a day than on the outside where every paving stone, work surface and plastic spork is a potentially lethal hazard.

In an almost interesting revelation it turns out that Johnjo is a homophiliac. That’s handy because prison is full of gays. “Don’t worry about it mam” he assures her when she visits “I’m getting ridden senseless and I’ve never felt better. Has me pizza come yet?” Coleen smiles sadly. Her boy really is fucked.

“I’m getting ridden senseless and I’ve never felt better. Has me pizza come yet?” Coleen smiles sadly. Her boy really is fucked

On her return home Margaret greets her and Colleen tells her “I always thought he’d make me proud by getting a degree or something” Jesus, she’s a fucking optimist. Even the University of NoHopeton would think twice before taking a tard like Johnjo on board (think twice before offering him tenure, the academically worthless fuckzone).

In a touching postscript it is revealed that Johnjo wrote to Margaret to say he never done it but he’s kind of guilty anyway – a different kind of guilt where you’re not actually guilty. Even by Johnjo’s standards his letter is a semantic and grammatic holocaust and a solid argument for enforced sterilisation of the underclass. But Colleen and Margaret lez off over it anyway and why wouldn’t they? One’s son got himself killed because he couldn’t keep his mouth shut, the other’s narrowly avoided life imprisonment for ordering extra garlic bread. Mothers united by their sons’ fuckwittedness. They really should form a support group.

I don’t suppose this was entirely shit despite it perpetuating the TV fantasy that prison is full of innocent people. Can do without another drama about how bad scrotes and their cunt friends have it though.

The verdict: I stand accuuu-oo-used of love in the first degree. And that murder I done.