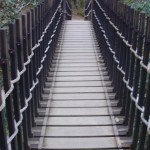 by jamdog
Review of I'm A Celebrity Get Me Out Of Here 2006 from TV blog Aerial Telly.

Rather like the image of Paul Burrell with a mouthful of kangaroo spunk, marsupial scrotal cartilage and half chewed Skippy bollock that defined 2004’s I’m A Celebrity Get Me Out Of Here the images of Kerry Kuntowner‘s god-awful Iceland adverts that are spit roasting each section of the show will come to define this year’s effort. If I ever shopped there I’d immediately cease in protest at these "that’s why bums shop at Iceland" atrocities. The producers are promising big surprises this year but we know that these will be along the lines of a useless 70s comedian being parachuted into the mix halfway through and being immediately voted out by the ever sensible public. The format may be getting a bit tired but the celebrities are as fresh and exciting as always. Ahem.

"If I ever shopped there I’d immediately cease in protest at these ‘that’s why bums shop at Iceland’ atrocities."

Myleene Klass – the ivory tinkling princess of pie and überfox has distinguished herself by being sexually attractive, really quite nice, smiling a lot and showering in her bikini. Of course, any of those alone would have done.

Faith Brown – ancient piss poor impressionist whose main role is to make a mockery of BB7 Leah‘s claim to have the largest breasts in Britain. I mean – them’s huge old jugs. The strain those swinging pillows must put on her back does not bear thinking about. A bit like her career, really.

“He should have made them suck his cock for the money. That would prove his masculinity AND leave The Face with egg, almost literally, on their face.”

David Gest – louche reptilian Hollywood parasite and former NOT!GAY husband of gay icon Liza Minnelli. She has accused Gest of trying to screw her in his sleep. Probably better that way for all concerned, no?

Jason Donovan – laughable NOT!GAY "actor" and "singer" best known for having girlfriend Kylie Minogue stolen by talentless suicidal smackhead Michael Hutchene. Successfully sued The Face magazine for suggesting he was gay. But then gave the damages back to prevent said magazine from going bust. He should have made them suck his cock for the money. That would prove his masculinity AND leave The Face with egg, almost literally, on their face.

Matt Willis – the "rebellious" one from Busted has courageously adopted the say-nothing, do-nothing template forged by Chris Bisson. Achingly dull and moderately inoffensive he’s too dreary to dislike. He’s an errand boy….. sent by grocery clerks…. to collect a bill. Sorry – the jungle got to me there.

"Toby Anstis – NOT!GAY children’s TV presenter asked knowingly ‘what boy didn’t have a crush on Jan Leeming?’ A heterosexual one?"

Lauren Booth – loose cannon of the Booth family, not to be confused with Cherie the loose jaw of the Booth family. Cherie may have got the brains but Lauren got the looks though these have clearly rapidly deteriorated in the few years since Aerial Telly saw her and thought she looked quite hot. Thighs like Giant Haystacks these days y’ken.

Toby Anstis – NOT!GAY children’s TV presenter. Asked knowingly "what boy didn’t have a crush on Jan Leeming?" A heterosexual one?

“Jan Leeming is annoying everybody by moaning but that is what incredibly old people do.”

Phina Oruche – Footballer’s Wives BOCFOC (Body Off Crimewatch, Face Off Christ-knows) . Says "I really am a nutter". She’s not kidding.

Jan Leeming – the five-times married former newsreader presented Marianne Faithfull‘s tedious "I’m going to grow old disgracefully" quote as her own in her introductory bit. Wasted everybody’s time with a crappy Bush Tucker Trial that yielded only two stars then blubbed about it. Is annoying everybody by moaning but that is what incredibly old people do.

Scott Henshall – utterly charmless and patronising IS!GAY fashion designer. Performed an absolutely abysmal Bush Tucker Trial screaming "get me out of here!" after getting only one star in one of the easier challenges. He makes the Appleton woman look like Evel Knievel. Thus in a single bound he went from minor irritant to hate figure. Ant and Dec looked at him appalled saying "you’re sure that’s all you can do?" A naff effort but it made great cat-call television. Or cunt-call television if you’re in Casa Aerial.

"’I’m from Liverpool’ said Phina. ‘So you’ll know the South London massive then?’ responded Booth. Has this broad lost her fucking mind?"

Other notable scenes have included Donovan and Gest grooming each other like two apes off some wildlife documentary – really quite remarkable; then Gest picking up a snake and placing it around his neck. He explained that he would play with snakes round at Michael Jackson‘s house. "Didn’t you go to Michael Jackson’s house and play with his snake?" Dec asked Ant innocently. Ant kept a diplomatic silence.

Then Lauren Booth began bogling with Phina Oruche and tried to engage her in reggae shop talk. "Our paths will have crossed." insisted the successful and respected political journalist "If you been to an all-nighter, I’ve been to it". "Well, I’m from Liverpool" said Phina. "So you’ll know the South London massive then?" responded Booth. Has this broad lost her fucking mind?

“One of these old fools is going to die one day. The autopsy will read: death by exposure (on prime-time ITV).”

She’s not the only one who you worry about. Gest remarked that as a 53 year-old climbing up hills all day, he needs sugar in his diet and he ain’t getting none. This is a fair point – aren’t the likes of Faith Brown, Jan Leeming and Gest getting a little too old for this? They’re at a time of life when they should be pottering around the garden and watching Countdown. One of these old fools is going to die in a Bush Tucker Trial one day. The autopsy will read: death by exposure (on prime-time ITV).

The best thing about it: Myleene showering in her bikini

The worse thing about it: Kerry Kuntowner, her kids and a man in a kangaroo suit

The verdict on I’m A Celebrity Get Me Out Of Here 2006 : The lion sleeps tonight.