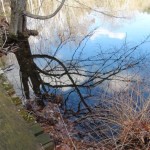 by jamdog
ITV Aged 7 Jane Phillips (Claire Goose), watched her mom get brained by a ment with a rock by a lake. Tough break. Undeniable takes up the story 23 years later. Jane is happily married to husbland Rob (Felix Scott), has an infant daughter (Chris from Homeland) and is newly pregnant. Things couldn’t be more swell.... Read More

Aged 7 Jane Phillips (Claire Goose), watched her mom get brained by a ment with a rock by a lake. Tough break. Undeniable takes up the story 23 years later. Jane is happily married to husbland Rob (Felix Scott), has an infant daughter (Chris from Homeland) and is newly pregnant. Things couldn’t be more swell. As she breezily strolls from her first antenatal appointment she spots oncologist Doctor Andrew Rawlins (Peter Firth). He’s a wonderful father, Andrew – exemplary doctor, loyal friend and all-round good guy. At least that’s what “they” say. But Jane takes quite a different view. For her, he’s Satan incarnate – the man who fucked up her mom with a rock. She sprints out of there like Lauryn Hill when she clocks the IRS come a-calling. Shit’s about to get real.

She sprints out of there like Lauryn Hill when she cooks the IRS come a-calling.

Problem is Jane’s not that credible a witness. The murder was 23 years ago and at 9 and 18 she swore blind she recognised the man who did the bad things and in both cases it turned out to be a big crock of shit. She has a history of mental health issues, has overdosed in the past and has recently abruptly stopped her meds. Dad Pete (Robert Pugh) politely reminds her of this. He wants to leave it all in the past. Just let it go! So you watched your mother get her brains painted over the Lake District by someone who was never brought to justice. Get over it already! That’s pretty much his position.

And yet, much like Warren G and Nate Dogg had to regulate, the Derbyshire Constabulary have to investigate. It comes as a shock to Rawlins. It’s the night of his son’s 18th birthday party and he can only confide in his his every holer daughter Emma (Christine Bottomley), by happy coincidence a solicitor. She’ll represent pops at the interview the following morning. It’ll be a piece of piss, she tells him – no doubt about it.

Over in Birmingham DI Alison Hall (Pippa Haywood) is having farewell drinks with her co-workers having just been told of her redundancy. Just two weeks left before she’s cast on the shit heap. When a colleague mentions the development in the Phillips case her blood is up. It was her first murder, her enduring failure. She remembers it alright – she still keeps the case files at home. She wants in. One last big case before riding into the sunset.

When the interview comes daughturd puts up a sturdy defence of plops and points out that Rawlins and Jane nearly collided in the car park just moments before the miraculous recognition epiphany. I suppose that does look bad yet Jane turns up a letter showing that her mother saw a locum GP called A Rawlins at a walk-in clinic during her pregnancy. That’s a bit of a coincidence eh plops?

Daughturd angrily confronts Jane telling her Rawlins never done it and so far the facts seem to be on her side. Blood on the mother’s dress, presumed to be the killer’s, is not a match for Rawlins when he finally submits to a blood test. So he’s got to be innocent then yeah? Give it up Jane. Let sleeping dead moms lie.

But Jane is not giving up and she’s not letting sleeping mom lie. Not this time, Gal. No way. Let’s see if we can’t make this innocent man’s life a misery. It’s all for you mom. Love you.

The verdict: Does anyone know the whereabouts of Puke from The Guilty?