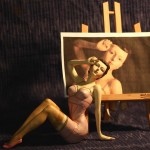 It’s been two years since Sarah Lund (Sofie Gråbøl) figured out that it wasn’t the schoolteacher, the janitor but rather ******* who did for Nanna Birk Larsen, her jug eared partner Meyer and, I suppose, that civil servant who got run over. Two years spent checking passports in Whøgivesåfuck – punishment for pulling a 9mm on a copper in her single-minded pursuit of looking a twat – and Sarah is ready for a new challenge. As luck would have it, a series of horrific murders take place and Lennart Brix (Morten Suurballe) knows that if you want a girl who draws down on her colleagues, gets her partner murdered and chases down more like blind alleys than a rat with its arse on fire you have to turn to Sarah “for fuck’s sake, Lund!” Lund. The Killing is back and it’s like it never went away.

“Strange wants to put his cock in Lund and she wouldn’t be averse to that. If ever a woman needed a good fuck it’s Sarah Lund – look at the tension in those shoulders and the perma glaze around the eyes. She has less interesting sex than Gwyneth Paltrow.”

New series, new partner (she got the last one killed, remember?) Say hello to Ulrik Strange  (Mikael Birkkjær). Strange wants to put his cock in Lund and there’s significant evidence that she wouldn’t be averse to that. If ever a woman needed a good fuck it’s Sarah Lund – look at the tension in those shoulders and the perma glaze around the eyes. She has less interesting sex than Gwyneth Paltrow.

But it’s all about the work for Sarah – another day, another killing. It’s soldiers getting it in the neck this time. The members of Aegir, a shady division of the Danish army that got up to no good in Afghanistan are being bumped off. It’s being made to look like Islamist fundamentalists are whacking Tommies but there’s significant motive for the Army to hush things up also. You can bet that Sarah Lund will be looking into this.

But for the coppers, their first priority is to catch up with Jens Peter Raben (Ken Vedsegaard), Aegir soldier who escaped from a low security psychiatric hospital when his pals started getting dropped.  Raben is also on the trail of the truth and it takes him to lots of new exciting places: lurking in doorways, ditches and sewage pipes. Being on the lam is not nearly as glamorous as they make out.

Anyway, this is good again. No, it’s not quite as good as the first series and the political stuff just really doesn’t have the same tension this time around but it still comfortably beats most of the drama out there. Forbrydelsen III is currently in production and the Danes can expect to see it on their screens in about 18 months. That’ll probably be alright as well.

The verdict on The Killing Series 2: Lund! For fuck’s sake get laid!

10 TV title sequences that make you be like “damn”
Previous Post
Camelot Starz review | I was GOADED, OK??