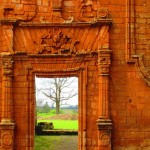 Mayday is the international distress signal. It is not to be confused with May Day, the festival held on the first day of May celebrating fertility and renewal. And yet Mayday takes place on May Day and presumably the intention is to squeeze some double meaning juice out of the distress caused by the May Day festival. It’s certainly stressful for Richard Sutton (Richard Hawley) and his annoying wife Jo (Caroline Berry) when their teenage daughter Hattie (Leila Mimmack) goes missing. Hattie was to be the May Queen but when the May Queen float approaches people can’t help but notice that there is a certain something missing, namely a May Queen. There’s an empty throne where Hattie’s maiden arse should be and when her bike is found abandoned by the woods people can only fear the worst. “Oh my God. It’s a BBC original drama five-parter spread over a single week! Aaaaarrrrgh!”

So who raped and killed the May Queen? I mean, there’s no body yet and she’s only been missing less than a day but she’s got about as much chance of making it out of those woods alive as Reeva Steenkamp had of making it out of that toilet unscathed. I’ll tell you who’s got motive though. Local property developer Malcolm Spicer (Peter Firth). Hattie successfully campaigned to stop him developing on local beauty spot Carroll’s Field and the crank Spicer maintains a movie serial killer style Mad Wall comprising local newspaper cuttings of Hattie opposing the development. His nausey wife Gail (Lesley Manville) certainly has her suspicions. We’ll be keeping an eye on you, “Malcolm Spicer”.

“There’s an empty throne where Hattie’s maiden arse should be and when her bike is found abandoned by the woods people can only fear the worst. ‘Oh my God. It’s a BBC original drama five-parter spread over a single week! Aaaaarrrrgh!'”

Or maybe the killer is Everett Newcombe (Aidan Gillen)? He sits around playing Xbox all-day yet mysteriously has enough money to live off and brutally slaps son Linus (Max Fowler) upside his head like his name was Charlie Murphy when he attempts to see inside the mysterious bag he keeps behind lock and key. Linus, incidentally, badly wants to put his cock inside Hattie’s hot Goth twin sister Caitlin (Leila Mimmack doubling up as both twins) so maybe he had a weird boner for her as well? Newcombe family: consider yourself under surveillance.

Watch, my friends as the suspects just pile up. Loving husbland and police officer Alan Hill (Peter McDonald) returns from a tough shift scrubbing himself like a ment in the shower. As his former police woman now homemaker wife Fiona (Sophie Okonedo) approaches him Anal barks at her to get the fuck out. Charming! Later she comes across his bloodstained shirt in the laundry. If he did kill the skank it’s not his finest hour is it? A policeman putting key forensics in the hands of another policeman that links him to a murder? Not much dramatic tension there really. But what if he you know, DONE IT?

Or maybe we are looking in the wrong place? Maybe it’s Hattie’s uncle crazy Seth Docker (Tom Fisher), a mental health issues blitzed man of the woods. He certainly mad enough. His brother Steve (Sam Spruell) a posse together to search the woods for whatever is left of his niece and as he searches it’s clear he has suspicions of his own when he wonders out loud “Seth – what have you done?” Hilariously Seth responds from the tree to himself “You know what I’ve done”. What, fucked and killed your niece? Oh you lovable rogue!

It’s an interesting one this. A little bit hysterical and self-consciously moody but involving nonetheless. Of course we’re assuming that Hattie is deader than the Lindbergh baby but given that this is a study of mass hysteria it wouldn’t altogether surprise if she turns up in one piece having taken a bad pill or something but not before the community has torn itself apart with family pitted against family, brother against brother, former copper against crazy man in the woods. I’d be up for a bit of that.

The verdict on Mayday: If you go down in the woods today you’re sure of a big surprise. Because for starters there’s a cunt up a tree and a dead broad in the ground with a face full of sorrow and her uncle’s DNA. Trololololololololol.